Up with the sun, we headed out early.  The first stop was McDonald’s for our requisite road trip breakfast, Egg McMuffins (or as I’ve been calling them for years – Eggamuffs) and hash browns.  Then, a brief stop at the Post Office to mail the Christmas gifts we bought in Key West for my Left Coast family (Note to the Postmaster General, the folks at the Cocoa Beach MPO are the nicest, most customer service-focused postal employees we have ever met!).

Crossing back over the Indian and Banana Rivers on A1A, we took the exit to get back on Route 1.

In Titusville, we stopped at the National Park Service headquarters for the Canaveral National Seashore to get our NPS Passport stamped then attempted to drive through the seashore area. Attempted, because about half way through, we came upon the bridge that earlier signs had said was closed, but which we ignored because the map didn’t show a bridge!  Oh well. If you’re into wildlife and fishing, this area is a must-see, representing what coastal Florida must have been before developers got hold of it. With no other way out, we turned around and got back on Route 1 in Titusville.

We set the cruise control set just a few mph above the posted speed limit so as not to attract Johnny Law. We rolled north, imagining what this road must have been like 40 years ago, before the Interstates and when big American V8s rumbled along getting 15 miles to the gallon of 30 cent gas.  It was easy to pick out the buildings that were there four decades ago. Despite the hustle and bustle of the Space Coast, this area of Florida got rural real fast.  Time stood still in some places. This was motoring as it was meant to be.

Within a couple of hours, density started picking up as we neared New Smyrna Beach. So did the number of old cheesy motels!  Most were dumps, but they definitely showed what travel accommodations were like in the 60s. So we weren’t disappointed when up on the right appeared an old Dairy Queen sign. Underneath was what looked like an original DQ, complete with outdoor tables and lots of shade trees around the parking lot. Lunch time! There was a line comprised mostly of locals, but it moved quickly as the friendly girls behind the counter kept the orders coming (it didn’t hurt that the menu was quite limited — ice cream and hot dogs…no burgers). The Tuesday special was two hot dogs and a milk shake for $2.99.  Throwing my lactose intolerance to the wind, we got two and sat down to enjoy the sun.

Our tummies full, we got back in the car and rolled through Daytona with our sights set on St. Augustine, the oldest continuously occupied, European-established settlement and port in the continental U.S. (so says Wikipedia). We bought our tickets to tour the old fort and after getting our NPS Passports stamped, sat down for the informative and entertaining Ranger talk. We walked through the various rooms of the fort reading about its history and climbed up to the roof and took some highly inappropriate pictures with cannon barrels. Thankfully, there weren’t many kids up there 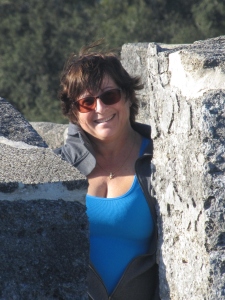 Highly commercialized, the old town was still a great place to stroll and shop. We found a great pirate shop that had some unique jewelry. We picked up a few pieces for gifts and then looked for an afternoon nosh and a glass of wine.  A second floor Tapas restaurant with a shady balcony looked inviting, so we enjoyed some Sangria and a trio of tapenades while we people-watched from above.

With the sun low in the sky, we hopped over to AIA to drive up the beach, reaching ritzy Ponte Verde Beach just after sunset.  With little to see and our next destination, Savannah, waiting, we reluctantly took the on-ramp to I-95 and dodged bleary-eyed truck drivers and rush hour traffic around Jacksonville. Judy did her best to distract me but we made it to the Andaz Savannah safe and sound, left our car with the valet and checked-in.

Up next:  Midnight in the Garden of Charming and Boring.