In German, “Über” is a preposition that means over, above or across and in popular abstracts it is sometimes used to mean superiority or excess.  Here in the States, it is quickly becoming a verb, as in, “We’ll just Uber there.”  In this regard, I’m talking about the popular car-sharing service. Based on superior experiences on a single recent Saturday, I believe they’ve chosen their brand name well!

Here’s the setup:  Judy has a knack for getting free stuff on her birthday, so we planned to walk to Bruegger’s Bagels in Old Town Alexandria Saturday morning to get her free bagel, then down the street to Market Square for the weekly Old Town Farmer’s Market.  As expected, we woke to heat and humidity.  We donned shorts and tank tops, grabbed a canvas shopping bag and an olive oil jug that needed refilling, and headed out.

The staff at Bruegger’s were delightful as they filled our order and we spent some time people-watching as I sipped and savored my coffee in the European manner.  We debated the wisdom of a young mother who seemed to carry every possible baby accoutrement in a shoulder bag the size of a suitcase, while admiring another who had merely a small bag of essentials in her baby’s stroller.

The Farmer’s Market was abuzz with buyers and merchants. 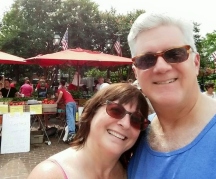 One of the latter was hawking his peaches as the sweetest ever, offering samples on toothpicks.  We tried them and couldn’t disagree with his claims, so we bought two. The vendor also offered some irresistible tomatoes the size of softballs in anticipation of a planned Sunday picnic and some bright, fresh broccoli for later in the week.  At the booth run by Dimitri Olive Farms, we refilled our jug with unfiltered olive oil, truly some of the finest olive oil we’ve ever tasted. It’s become a staple in our kitchen.  We tried some of their orange-infused Kalamata olives, and quickly bought a pint for the aforementioned picnic.  We rounded out our purchases with fresh mozzarella cheese from Blue Ridge Dairy Co., and a clump of fresh basil…the thought of caprese skewers as part of our picnic made our mouths water!

With the late morning heat approaching 90 and a full bag of groceries on the shoulder, the thought of walking home was appalling, so I pulled out my smartphone and clicked on the Uber app to get a car.  Within two minutes, Johnny arrived in a shiny black Lexus and chauffeured us home.  One of the beauties of Uber is that there is no cash involved.  When you sign-up, you attach a credit card to your account.  When Johnny dropped us off, there was no awkward exchange of cash or credit card, figuring out a tip, or any of that…we simply said thank you and went upstairs.  Within minutes, there was a receipt for the $7.34 fare in my email.  The app lets you rate the service; I rated Johnny highly for the cleanliness of the car, the prompt service, and his engaging personality!

That evening, we had plans to celebrate our six-month wedding anniversary with a dinner and dancing cruise on the Potomac River on Nina’s Dandy – we had won it at a charity silent auction a year earlier.  The boat would leave from Old Town waterfront for its three hour tour (bet you’re singing the theme from Gilligan’s Island right now!) We briefly debated driving and paying for parking down there.  We quickly put the kabash on that, in anticipation of the potential for drinking adult beverages in excess.

Around 5 p.m., we dressed in “casual cocktail” attire, pulled up the Uber app again and set our destination as Alexandria’s Market Square, this time for a visit to the Old Town Arts & Crafts Fair.  Essaid arrived within a few minutes and drove us to Old Town.  Inquiring about his accent, we learned that he was from Morocco, which led to much discussion about Judy’s travels there.

Strolling the stalls of the fair, we found lots to like and even bought a beautiful hand-crafted puzzle box.  We still had plenty of time before the boat was to board, so we stopped by our favorite Old Town watering hole for a cocktail and to check up on our favorite bartender, Bruce, who we hadn’t seen in months.

Appropriately lubricated, we boarded the boat and sat next to a wonderfully pleasant young couple, Joe and Gina.  Joe is a U.S. Army veteran who met Gina in Germany (Judy recognized her accent instantly).  Is it any wonder that we spoke with them almost the entire evening?

The food on Nina’s Dandy was excellent and the views of the Jefferson and Lincoln Memorials, Memorial and Key Bridges, the Watergate and Georgetown from the upper deck were spectacular.  As the sun went down, we took lots of pictures and descended below for a bit of dancing, then more pictures from the deck with the lights of Alexandria and National Harbor, Md., behind us as we docked.

A short nightcap followed and once again, we pulled up the Uber app for the ride home.  Ahmad was right at the corner when he accepted our ride.  Feeling the positive effects of a bit too much alcohol (which is to say, I had a good buzz on), I remarked to Judy that THIS was the reason we didn’t drive.  She agreed wholeheartedly.

The moral of this story is not about staying safe when not exactly sober…it’s about using new services and technology to make a great day even better.  Uber costs significantly less than taxis – our total fare over three trips was about $25 – and is incredibly convenient.  Our car stayed safely in the garage while we stayed cool.  Uber made our day of local distractions a truly “uber-iffic” day.