2014 was a monumental year for many reasons. First, I got married. Greg and I tied the knot at the end of the year in Key West, Florida. Second, it marked the halfway point of my 26 year plan to see the world. M, of course, is the 13th letter of the alphabet. That meant we not only had to do something special, but we had to do it in a way that didn’t cost too much money since we had a wedding to pay for.

As anyone who travels (or even aspires to travel) knows, one of the biggest expenses for any trip is getting to your destination. Since my one hard-and-fast rule is each A-B-C trip must be outside the 48 states, transportation costs are typically more than half the cost of the whole trip. I also love the feeling of exploring a new culture, something you really only get in a foreign land. After trying to find something close enough to save on transportation costs, but far enough to feel foreign, we settled on Montreal.

If you’ve never been to Montreal, you may not know it’s more like a French city than many places in Canada. In fact, it’s a little like going to Europe without leaving North America. It’s laid out like a European city and the primary language is French, although English is spoken everywhere. So we booked a round trip on Amtrak’s Adirondack Express during the peak of fall colors and headed north.

I’d done my research and knew to sit on the side of the train facing west for the northbound trip and the side facing east for the southbound. That’s because the views of the Hudson Valley are prettiest in the morning and headed south, you want to be able to see the lakes and water to the east during the brightest part of the day. We got lucky and the colors were brilliant and lush for much of the trip.

On arrival we grabbed a taxi and headed to our small inn, Auberge de la Place Royale, right on the river with views of the water and the port. Our queen suite on the third floor was a HUGE room with a large sitting area and charming décor complete with a brick accent wall. 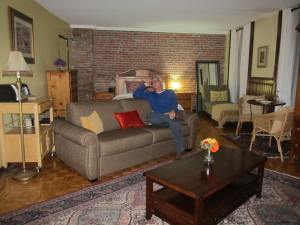 We couldn’t have picked a better place. Fresh French pastries and coffee are set in the room under glass for you to enjoy the next morning with a mini fridge stocked with juices.

Montreal was cool with perfect fall sunshine and breezes. We knew to pack for the weather and spent our days wandering the old town and took a water taxi to Parc Jean-Drapeau. Greg had been to Montreal as a young boy with his dad and wanted to see the one thing he remembered, Habitat 67. The walk was full of photo opportunities and bright blue skies.

We also found the charming and architecturally fascinating Plateau Mont-Royal with its ironwork staircases and colorful rows of townhomes. Trendy shops and fun foodie spots abound in Montreal. Our favorite, by far, was Chez Delmo. It was crowded, but there were two seats at the bar so we grabbed them and chatted with Chris, the bartender. He was AMAZING and offered an interesting drink suggestion and an appetizer that was not on the menu. The entire experience was perfect!

We’ve discovered the best way to find a good place to eat is twofold. First, if it’s crowded, that’s a good sign. Big crowds mean good food. Second, if there are at least two or three things on the menu that look really appealing, you’ll be much happier. That’s not to say you shouldn’t try things you’ve never heard of; we do that ALL the time. But get two entrees, one you want to try and one you’re pretty sure you’ll like. That way you’ll never be hungry. We share our entrees for variety. We’re lucky that we have similar tastes, so that helps.

We had two FULL days in Montreal to explore and enjoy before hopping on the train for the day-long ride back home. A couple of quick tips: Don’t forget that you’ll need a passport or passport card to cross the border; Canadians take US dollars, but you’re better off exchanging your money since they offer a 1-to-1 exchange rate and you save a little by using Canadian dollars. Plus, you’ll need a few coins for getting around town on the metro.

In short, Montreal goes into the book as another successful adventure as we continue our quest to see the world one letter a year.

I have a passion for story telling and travel. I hope my tales of wanderlust inspire others to see the world, be adventurous and find their own passions. View all posts by Judy Romano

3 thoughts on “M is for Montreal”