I wake from a quick nap at 37,000 feet and look over at Greg. He’s in his happy place — the window seat this time. We take turns because we both love looking out the window as we fly.  He doesn’t see me looking at him. He is turned away; his face is pressed against the window pane like a small child looking into the window of a candy shop.
After a moment, he turns slightly and looks down at his iPad. He’s got flying charts for the entire US open and he’s following our flight … making a note of airports, private runways, landmarks and anything he can match between his view and the chart in his lap.

He notices I am awake and looking at him and breaks out into a grin. It’s a smile that says a thousand things: Good “morning;” Thanks for flying with me; Thanks for giving me the window seat; I love this whole experience. We say these things to each other all the time. On this particular occasion, I just smile back and ask, “where are we?”
He knows right away and points out a river and a small runway. Off in the distance is Oklahoma City. The skies are clear and the view spreads out for miles in every direction.

This flight is no different from others. We both love to fly. The majesty of the world spreads out below. It doesn’t matter if it’s in a commercial jet at 37,000 feet or in a Piper Arrow at 6,000 feet. There are always marvelous things to see.
He turns back to the window with a childlike sense of curiosity as I reach for my novel. Flying is his happy place. There’s a whole world out there waiting to be explored … find your happy place.

From my earliest days, I wanted to fly.

As a youngster, I was fortunate to fly commercially before airliners became nothing more than airborne buses and coats and ties were de rigueur. 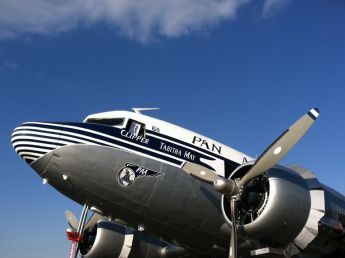 Flights in Lockheed Electras, Convair 440s, Boeing 707s and DC-8s had me glued to the window as the earth fell away during takeoff. Back then, cockpit tours for kids were a must, and the stewardesses (as they were called then) ALWAYS had wing pins for their young passengers.

Balsa wood, tissue paper and dope models followed, as did subscriptions to every flying magazine I could get my hands on. Dad took me to airshows at Pt. Magu where I saw the incomparable Bob Hoover in his Aero Commander Shrike perform a complete aerobatic routine with both engines silent.

My best friend’s grandfather took us up for a ride in a Piper Tri-Pacer out of Van Nuys airport and later a Piper Apache; his dad took us up in a Cessna 310 … the stage was set.

But priorities changed.  Sailing, then cars and girls in high school, more sailing in college and a first marriage kept my aviation dreams at bay. But then in 1993, the planets aligned and an opportunity presented itself that was simply too good to pass up … a close friend had an opportunity to buy an old Cessna 150 for $9,000 – a bargain! – did I want in?  Absolutely!  Another friend had just received his Certified Flight Instructor certificate and would train me in exchange for the flight time.  Deals were made, checks written and the airplane was ours.

My logbook tells the story.  My first lesson was on April 6, 1993 in a Cessna 172 when we went to pick up the plane.  Mike flew it back. I soloed just three months later with only 18 hours logged!  I passed my private pilot checkride on March 21, 1994.  Bigger and faster airplanes followed and in December 2001, I passed the checkride for my Instrument Rating.

It all stopped in 2003.  I moved east and when the promise of a new job failed to materialize the finances to fly just weren’t there, and then life ensued.  The dream faded but never went away.  A new, but short-lived job with the Aircraft Owners and Pilots Association threw new sparks on the fire, but my then-wife wasn’t a flyer … it wasn’t a priority.

Fast forward to 2012 when the woman of my dreams enters my life … and she wants to fly!  Judy not only supported my dreams, but wanted her dreams of flight to be realized.  For a wedding present, I got her a logbook of her own and an introductory lesson.  On a cold day in January, I watched her take off for the first time at the controls.  Later that summer, I, too, was back in an airplane with a new medical certificate in hand and an instructor putting me through the flight review paces.  It took a few flights – I was definitely rusty, but it all came back and my instructor signed me off.  I was back in the air!

A week ago, I was again signed off by an instructor to fly one of my favorite airplanes, a Piper Arrow, and later this year, I hope to regain my Instrument Rating currency. In the meantime, Judy and I are planning many flights together. 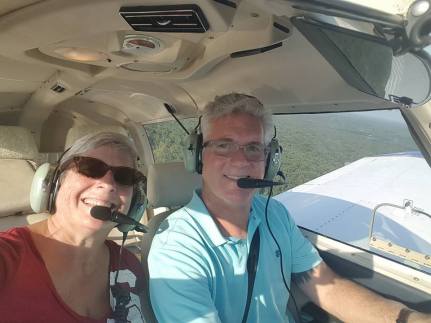 Today is National Aviation Day…a day to celebrate why we fly and our nation’s long history of flight. I am incredibly thankful to live in a country that affords me this opportunity…but it is an opportunity that is being put at risk by Congressional legislation to privatize our Air Traffic Control system. This move will make private aviation too costly for all but the richest folks and put control of ATC in the hands of the airlines that do NOT have your interests at heart. Thousands will lose their jobs and critical infrastructure served by general aviation will be lost.

If you have ever, even once, thought about taking a flying lesson, enjoyed a scenic flight, taken a flight with a friend to another airport for a “$100 Hamburger,” I ask you to do two things:  1) Write or call your representatives in Congress and tell them to Modernize, not Privatize, our ATC system, and 2) Book a flight with an instructor TODAY and see for yourself what joy flying brings!  If you need some advice, contact me…I’m always happy to talk flying.

There’s a whole world out there, waiting to be explored…see it from the front seat!

I grew up around airplanes. I remember as a very little girl, going to pick my dad up at work at Griffiss Air Force Base and him letting me sit in the Link Trainers he worked on.

From that base we moved to more Air Force bases … Nebraska, Nevada, Texas, Illinois, Mississippi, Ohio, Germany … almost too many to count. The one thing that was an absolute constant in my life was the sound of airplanes. Propellers, jets … it didn’t matter what kind of plane to me. I was too young to really understand the difference between bombers, fighters and cargo planes. I knew that sound, though. It really is the sound of freedom.

Every base had an airshow in the summer. We always went to the airshow. The US Air Force Thunderbirds dazzled my sisters and me with their feats of acrobatics.

Bombers and fighters showed off in the sky. The idea of flying was magical. My fascination with the Thunderbirds led me to an airshow a couple of years ago where I got to touch one! I met a Thunderbird pilot and got her (yes, HER) autograph.

I didn’t actually fly in a plane until I was in 7th grade. My dad had orders for Germany and he and mom wanted to make sure we would be able to tolerate flying since we had all experienced inner ear problems as kids. On the way home from a vacation, Dad dropped Mom, me and my sisters at the airport in Montgomery, Alabama, where we caught a short flight to Mobile. He drove down and met us when we landed. It was AMAZING! I was hooked!

We flew to Germany and back a couple of times then returned to the states. I was in high school, so I joined the Civil Air Patrol in the hopes of getting into a cockpit. It didn’t happen.

When I was in college, I enrolled in ground school.

I passed with flying colors (no pun intended) the day before the nation’s air traffic controllers went on strike. Flying lessons were no longer an option.

I enlisted in the Air Force and kept an eye out for opportunities to fly, but I was never at the controls. I managed to swing an assignment for the base paper when I was at Dover Air Force Base that landed me in the crew section of a C-5 for an extended mission.

I had a family. Kids, money, time commitments all played a role in slamming the door on my dream of flying a plane. I wrote off the dream and did what I could to travel by air just to be up there among the clouds.

Then I met Greg. A private pilot, he had let his license lapse. When I asked why, he only offered the typical excuses … not enough time, not enough money, blah, blah, blah. We made it a priority to get him back in the air. He introduced me to friends he had flown with years earlier. One even let me take the controls of the experimental aircraft he had built! I FLEW IT! Sure … it was only for a couple of minutes … but I actually FLEW IT! The dream came back to life!

We check out aviation museums, local airshows and just about any aviation event we can find.

When we got married, he gave me my own pilot log book and I took my first lesson. I’m headed towards making my first solo flight, but in the meantime, Greg got re-certified. We’ve climbed into a Cessna and taken a few short trips.

We even created an aviation-themed bar in our home – complete with a replica wing for a bar and aviation nose art on the wall.

Recently, he got back into the cockpit of a Piper Arrow and the flying bug came back to life in him. We were off the ground. It’s a priority for both of us. From here – the sky’s the limit!